Windows for the Win!

I needed to cobble together a platform for the batteries for the solar power system in our greenhouse. Normally I setup my saws so that they are parallel to the window wall but for some reason I set up the miter saw perpendicular instead.  I knew that I needed to get the big doors open later today and I guess I was thinking about that instead of how to deal with long lumber.

I was cutting down some 8' long scrap lumber for this little project and as I set that first piece on the saw, I noticed that I didn't have enough room. The saw is in the middle of the room which is 12' wide which leaves 6' on either side. Now you see the problem, 6' width, 8' piece of lumber. Fortunately one of the windows was in the right spot. I opened it up, popped out the screen and BAM, plenty of room to cut long lumber with!

I happily cut up scrap lumber to make a base for the batteries and 30 minutes later that job was done. Windows and scrap wood for the win! 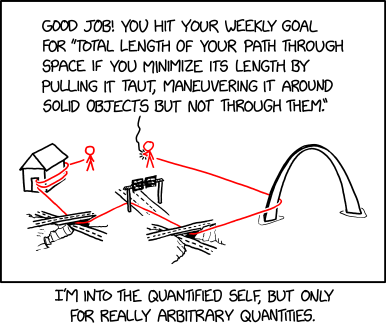 Reviews are not something I usually do but Jon Russel from Warlord Games shoved this set of templates into my hands at Reaper Con 2022 and asked me to let him know what I thought about them. This is for you Jon! Just to be clear, I did not pay for these I was just asked to say what I think of them.

I have a fondness for Sarissa Precision (https://sarissa-precision.com/) products and I have built a fair number of their MDF buildings, I still have some of their buildings in the que to be built (part of the never ending World War II project), but I haven't purchased anything from them for about 4 years or so, so it was off to visit their website to see what Jon had really handed me.

The stencils are; Slate/Tile Small, Herring Bone Brick, Red Brick, Block Stone, Rough Stone, Tiles, Slate/Tile Large and Edging/Pillar Detail. There are two ways to use these, first as a standard stencil for paint and second as a stencil to apply texture with. They are thick enough to be used for texturing and I would say are actually more useful this way.

The instructions are nice, well written and include full color pictures to help you through the process. They are very short! But really there isn't a lot to say. At this point I would say you have a pretty high quality product in your hands. The question really is how do they perform.

Mr. Faulkner uses a pre-colored wood filler along with some PVA glue to create a more or less peanut butter like mixture. I didn't have any wood filler on hand and I'm far more likely to use stuff that modelers are going to have on hand. I have a large jar of Liquitex Matte Gel, a medium jar of Liquitex Natural Sand and a jar of Ammo's Acrylic Mud (A.MIG-2103 Turned Earth Ground). The Ammo product is very similar to the Liquitex Natural Sand but pre-colored. I used these products straight from the jars and applied that to some MDF that I had left over from some project or another. 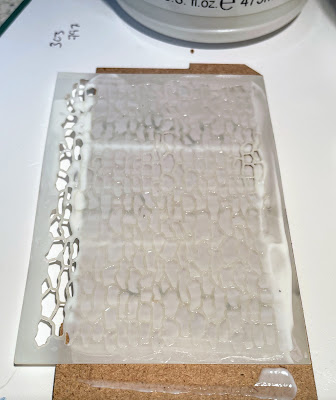 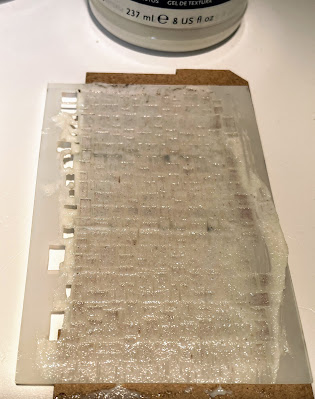 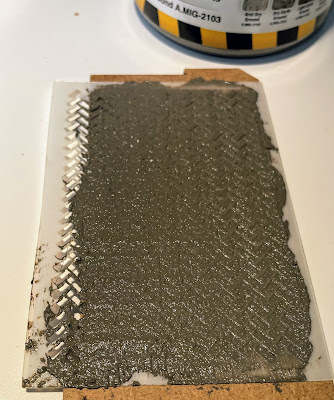 I have to say that I was quite pleased with the results. The instructions say that the templates were designed so you can continue to repeat the pattern. That I didn't try, from my brief experience I would say that you really need to let the first part harden up completely before you add to it otherwise you might smudge your work. I can see a lot of uses for these templates as I work on different projects. While the initial price tag feels a little steep I think they are worth the price.

That being said I do think the choice of templates could have been better (that old personal opinion coming to the fore). I would like to see a couple of different brick patterns and less tile patterns. While the Edging/Pillar Detail is quite nice, another one featuring brick arches for doorways and windows would not be amiss (although likely to be difficult to actually create). The Red Brick template is very nice but this type of pattern is typically used when the wall is hollow and likely has some fill. I would definitely keep it, but I would like to see a Flemish Bond and an English Bond pattern (oddly enough Flemish Bond is very common in Britain while the English Bond is common in the US).

From the top then:

Slate/Tile Small - keep
Herring Bone Brick - keep (very useful for all kinds of places)
Red Brick (or running course) - keep
Block Stone - Keep (again very useful)
Rough Stone - Keep (love this one)
Tiles - keep (although I'm 50/50 on it. I don't think I would miss it)
Slate/Tile Large - drop
Edging/Pillar Detail - keep (useful but could be better)
I would like to see
Flemish Bond Brick - Common in Britain usable just about anywhere
English Bond Brick - Common in the US, again usable anywhere
Arch detail - Independent of the type of brick pattern being used could feature both brick and stone arches along with door and window sills.
Cobblestone - A useful addition for roads.
In the end I think this product is worth the price if you are working on any kind of laser cut building kit or scratch building something. These templates are useful on walls, sidewalks and some streets (that herring bone brick pattern is going to get used a lot!).

Sophie's Revenge - The Conundrum in the Captain's Cabin

I definitely like to think somethings all the way through before I start cutting things up. As I have mentioned previously I'm starting the rebuild of Sophie's Revenge with the Captain's Cabin. Ultimately I'm envisioning this as being broken up into two compartments; the Captain's Cabin itself and officer's quarters (or what ever the pirate equivalent would be). I need to add quite a bit of detail in both areas which has brought up a couple of things.
1) The ceiling on the Captain's cabin. I'm going to go higher than I originally intended which will increase the overall height of the poop deck and the map room. This deck will probably get shortened because of that, but it will solve the "skylight" problem.
2) The Captain's cabin should be pretty extravagant (its a fantasy pirate ship after all), while I can work with it as is, I could take it apart. I stopped short of complete disassembly but the reality is that this section is really five pieces, of which the Captain's Cabin is three of those. It won't be easy to separate these pieces, they are glued together very well.
So just some more decisions to make and decisions are easier to make if there are pictures!

Lot's to think about before I start building things. Although I could just start with the Captain's Cabin and finish it out and build everything else around it. Some seat of the pants work for sure.
Posted by Heisler at 10:43 AM No comments:

Posted by Heisler at 2:05 PM No comments: