My little side project is basically finished. I still need to neaten up the bases a bit and add some white lines on the "grass".  The biker dwarves are from Neomics, the medic and the cheerleader are from Gaspez-Arts (part of their pirate dwarf team).

Overall I'm pretty happy with this team, its not my best work but it does have me fired up to get back to work to painting some western pieces. There are some terrific poses on the team, the sculpting is pretty good but the casting leaves something to be desired on some of the mimis. I really like the poses for Blitzer 1, Runner 1, and Runner 2, very dynamic, should look great on the field. I think Berzerker 1 is my favorite though. The owner is the one I like the least, I think I will replace him if I can find something better. He is just not a good sculpt.

Now one of the other things I decided to do with this side project was use my Games & Gears kolinksy brushes exclusively. I backed their kickstarter for three sets of brushes, all of which arrived pretty much on time. From a Kickstarter perspective they really did a great job. Now I know that they have lots of people that love their brushes including painters better than me. However, I went through all the brushes I received, the basic set plus some extras, and really the only brush I liked was the chip brush. I decided the double headed style (brush on each end) isn't for me, I don't do two brush blending so having a brush on either end doesn't do me any good. I was able to adjust to the length okay, although I did need to keep the caps on the end I wasn't using. None of the brushes that I have will hold a point for any length of time (well the chip brush isn't really suppose to hold a point!). Which made getting my highlights into place a bit difficult, eyes and other fine details were harder than normal as well.

Oh and I guess I should admit that I didn't use the Games & Gears brushes exclusively now that I think about it. I pulled out my Da Vinci Maestro #1 (series 35) to paint the stripes on the cheerleader's pants and the lettering on the back of the jackets. I just couldn't get it done with the G&G kolinsky brushes.

At this point if you were to ask me, I would not recommend the Games and Gears brushes. I have one set unused and I sent the other set on to Anne O'Leary to try out. I'm curious to see what Anne thinks of them.

Now the whole point of this is to show off some pictures. Since I still have to do a little work on the bases I have left them on the soda caps that I use to hold them while I paint. 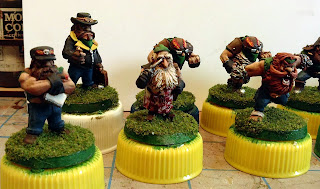 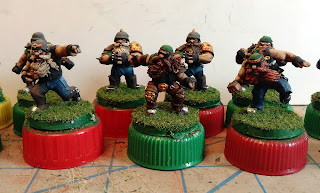 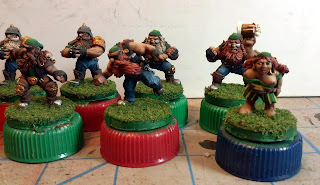 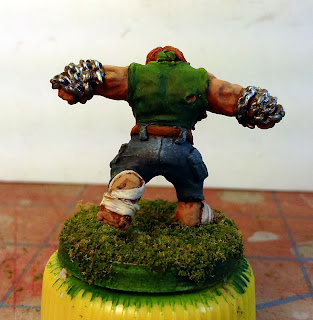 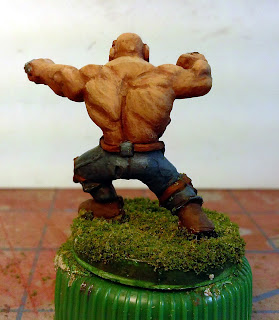 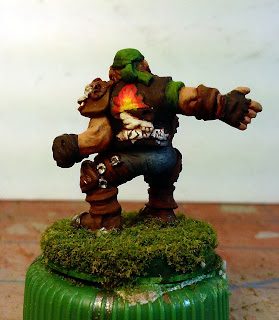 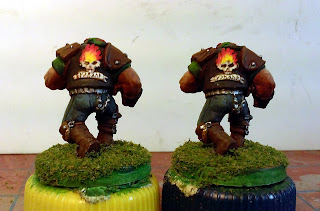 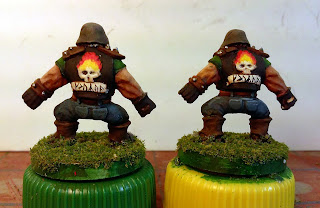 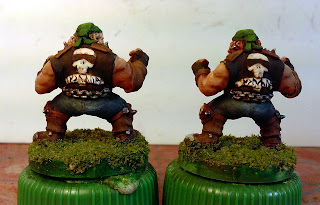 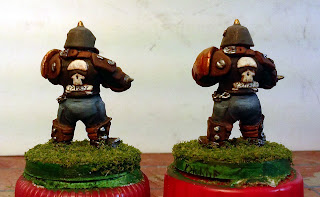 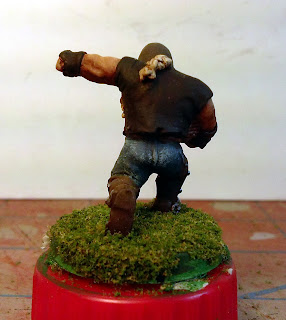 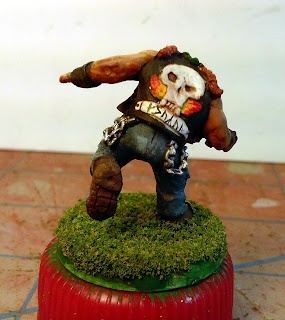 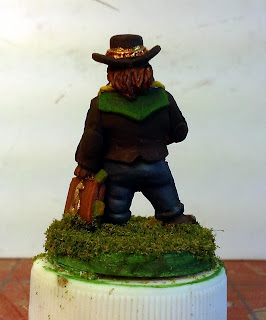 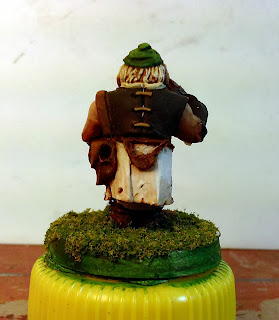 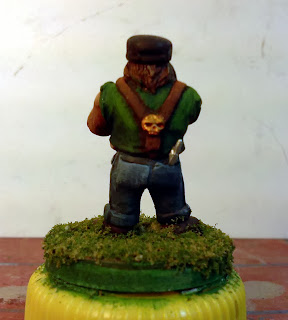 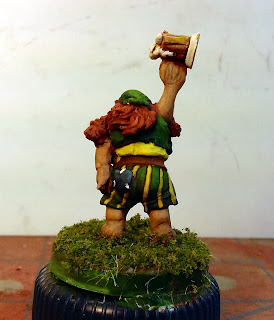 Its Party Time - Reaper Talk Radio with Bryan and Matt

Down to 8 hours, 2 hours to the start of the party. Matt and Bryan are setup in the plant to play music and monitor the kickstarter as the countdown continues and Dragon's Don't Share has just been revealed. Looks like a good time today! If you are in the area (Denton TX) come on day and have some BBQ with us! 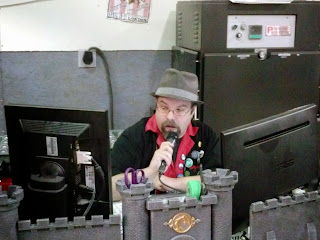 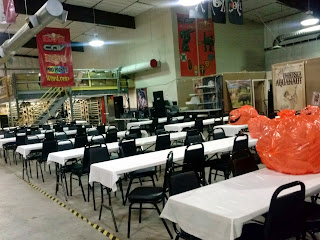 Posted by Heisler at 9:45 AM No comments:

BONES II; The Return of MIster Bones - Heading into the last day

Its late, I'm at Reaper and its been a long day. The picture is already a bit dated because we are under 24 hours to go. Saw some amazing stretch goals today, and I have seen what the big stretch goal for tomorrow will be. Pretty stoked about that. Anyway I'm off to bed, hopefully the numbers will keep climbing. If you haven't been keeping up then head over and check the kickstarter and go through the updates. If you can't make a big pledge then pledge a $1 and you will have access to buy stuff after the kickstarter is over at kickstarter prices. Tomorrow should rock.

I know, I know, to much BONES this month, but this little announcement was pretty exciting. Sophie, Reaper's mascot, has been added to the core set. This will be a 28mm version, so suitable for a gaming piece, sculpted by Bobby Jackson. The concept artwork looks fantastic and Bobby will be working on the sculpt this week while he is at Reaper. This is Bobby's first Sophie sculpt so I'm looking forward to seeing what he can do. Remember BONES II ends at 6pm (Central time) on Saturday! 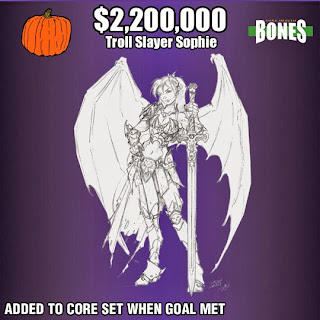 BONES II
Posted by Heisler at 9:23 AM No comments: 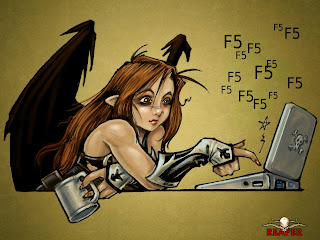 This kickstarter is moving right along and I'm still firmly in the camp of it breaking the 4 million dollar mark by the end. And with that in mind I would recommend jumping in now before the servers crash. For those of you running really tight budgets right now (darn that broken windshield) there is an option for you. You can pledge for $1 that gets you in and locks in your spot. The $1 pledge will allow you access to everything, so if you just want that box of mouslings, you are in for $11, if you want just one of the components of the core set you can get it that way. What really makes this a good way in is that you can increase your pledge later through the pledge manager. That doesn't help us unlock additional stretch goals but if you only have $20 bucks today but will have more when that paycheck arrives you can still pledge and get what you want at the kickstarter prices.

If you are a backer outside of the US then you will be paying for shipping. Reaper has set up a pledge calculator that will let you determine what the postage is going to be right now. This locks in that as your postage amount which you can either include as part of your pledge or pay it later through Paypal. There is no calculator thought for taxes (unless you live in TX), import duties, fees, VAT etc. You are on your own there. But if shipping rates go up before the delivery next year then Reaper is picking up the difference. They have made this one really easy to get into so just dive in!

Here's a pic of the latest goal that was just tripped this morning. This is an optional add-on and could be used in a lot of games from fantasy to horror to Sci/Fi. That's a lot mini for $12.

If you have had any doubts that a Reaper BONES miniature can be used for a competition piece this bit of paintwork by Victoria Lamb should dispel those doubts. 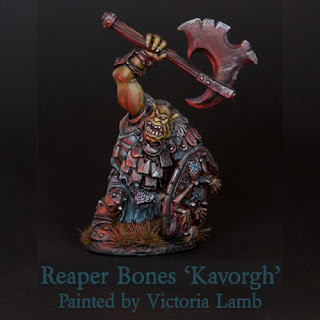 Here is the link to the appropriate post on her website. If you have never seen her work spend some time looking through her gallery and then buy some miniatures.

Yesterday was dull and dreary out, so here is a shot of the sunflower garden still in bloom with Tango in the middle of it all. This is the closeup shot, there is another that shows just how small he is against the sunflowers. Today its all about him though. 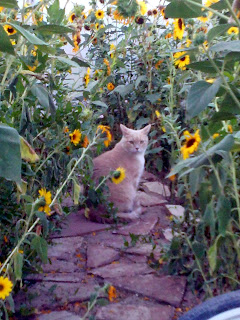 I started yet another project, but a small one so that I would be sure to finish it. Plus there is deadline date so that I can join the local Blood Bowl league that my friend runs. I don't actually play Blood Bowl at this point but I have a number of friends that do and quite frankly I have been in a serious rut with my western town of Calamity so I thought that a small project might get me back on track. I spent a lot of time looking for a team that would be fun to paint and I finally stumbled across a dwarf biker team by Neomics. I decided that this was the team for me.

I picked up two other dwarves from Gaspez-Arts (also carried by Neomics, I think maybe even the same sculptor); The Dwarf Medic and the Dwarf Cheerleader. These spositions weren't available in the Neomics line (I may, at some point, pick up the entire team from Gaspez-Arts. The Pirate theme just didn't thrill me then, but it has become more appealing now).

So an order to Neomics in Germany, got me everything I wanted, well mostly wanted. The initial order fulfillment got me an extra "blitzer" instead of "runner 2" but Neomics took care of that. However, the replacement that they sent was miscast and  basically missing his right hand. Rather than have to wait another 2-3 weeks for the replacement to arrive I used the hand from one of the dwarfs lying around my workbench. Another volunteer for the melt bucket at ReaperCon.

This little project is finally coming to an end. I thought I would show a few in progress shots now to get me over the hump and get them done. Sixteen of them are now at the touch up stage and the last one is about 75% complete. I'm going to push hard to get them finished this week. Then I just have to hook up with my buddies and see if I even like this game. Its quite possible this team will be up for sale very quickly!

So just a few teaser shots at this point. At this point most of these are only about 50% finished, some more some less. Its just a sample of what I have been doing. I'll post more shots when they are finished.


Hopefully finished shots of the whole team later this week. My first game is Saturday.
Posted by Heisler at 10:22 AM 12 comments: 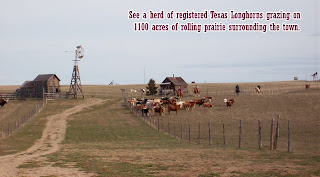 I'm always looking for new sources on western buildings and some how I stumbled across this one yesterday; 1880 town.
Its in South Dakota so I should make a trip out and visit it next year. Its not a "real" town in the sense that is an existing frontier town but it has been put together from buildings the owners purchased and transported to the site. Buildings range from the 1880 - 1920s. There aren't nearly enough pictures on the site but there are enough to see some of the more unique buildings on the site. I can't find it now but somewhere YouTube is a video of the inside of the saloon. Now I would question if this was a saloon or a theater. Most saloons don't have a stage, but the interior shots are very interesting none the less.

If by chance any of my followers are from SD and near Murdo and have pictures I would love to see them!


And another astronaut passes into history. Scott Carpenter was one of the original Mercury 7 astronauts in the US space program. His passing leaves only a single member of that group still with us; John Glenn at 92. Carpenter was the 4th American into space and the 2nd to orbit the Earth. Especially poignant for me as he is from my adopted hometown of Boulder CO, where you will find the Aurora 7 elementary school named after his spacecraft as well as Scott Carpenter park with a space themed playground (I should check and see if the playground is still there, it has been a while). In addition to that little connection by uncle was part of the team at Cape Canaveral (later renamed to Cape Kennedy, put really known as just the Cape to most of us) that launched the Mercury missions into space.