Genghis Con XXXVII - Its a Wrap

Genghis Con has come and gone for another year. Overall I think it was a good show and the new management group did okay. MBST who came in and ran the website and handled registration did a pretty good job. I'm still irritated that the painting classes were not entered properly and I think that contributed greatly to them not being full but we did have at least a few students in all the classes.

Next year I'm hoping that the CMPA will be invited back sooner and can do a full slate of classes. I may start planning for that now. Several things would have to happen though. We would definitely need two rooms; one for classes and one for the painting HQ, open paint and competition area. We just seem to generate a lot of noise for such a small group. I wouldn't think two rooms would be a problem either, the room next to us was basically empty the entire weekend. We were located just about as far away from everything as it was possible to get. I would like to get the painting competition back up and running and I would need time to get sponsors lined up. I would also like be able to bring a guest painter or sculptor again.

We did manage to pull off the auction as well. I was squeezed into a space 1/4 of the size I'm used to having for it. Fortunately because advertising for the auction was so late I didn't have nearly as much stuff to sell off and there was some highly collectible material in the mix this year so it was fun. I think we were all wrapped up by 10pm so about 3 and a half hours. We had to deal with a new system and attendees had to go upstairs to pay and even though I gave the desk a 45 minute warning about the auction ending they still weren't prepared for the flood of people that needed to pay. They also allowed an unlimited number of items to be registered online. I only had one person really abuse it so it didn't hurt to much but if it had been three or four it could be a huge problem. A couple lessons learned that can be carried forward to next year.

I spoke to a couple of the other coordinators and things seemed to run pretty smoothly for them. The biggest issue being that they really didn't have control of the tables in their own areas and really couldn't make efficient use of the space. I still don't understand cosplay or why the new owners seem to think it was a good idea. There didn't seem to be a whole lot of interest from my standpoint, it certainly didn't seem to generate additional attendees. They did, however, do the computer room right and that room seemed to be packed the whole weekend.

So a good show, not a great one for me. I can't speak to how others may feel about it. The CMPA will definitely be back next year and hopefully they will let us do an auction again as well.

Some pictures from the event: 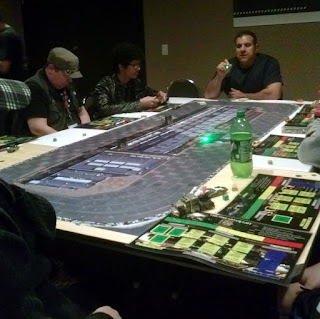 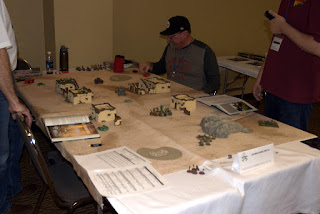 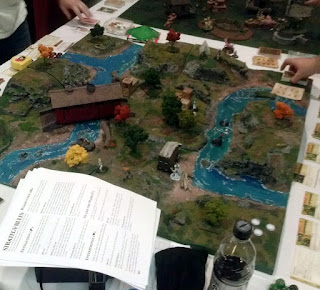 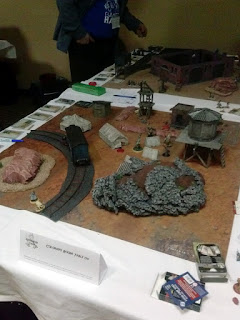 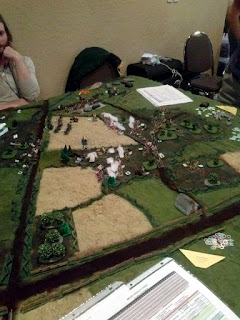 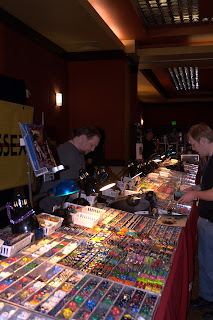 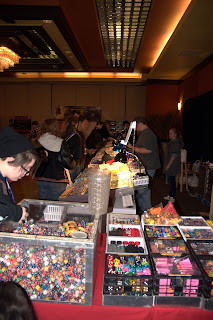 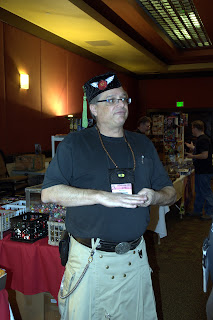 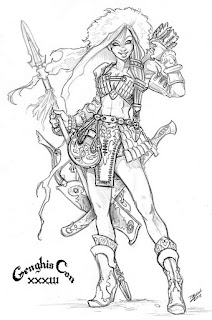 Genghis Con (February 11th - 14th) is Denver's main gaming convention. This will be the first one run under the auspicious of the Gamers for Veterans non-profit group. I have very strong ties to this show as it was the first gaming convention I ever attended (I was 15) and I haven't missed a single one. I have filled virtually every coordinator position and was the con manager for GC IX through GC XXI and quite frankly I'm disappointed with the direction being taken by the new organizers.

They opted to not print pre-registration booklets because by the time of the show they aren't accurate. I won't argue that point but odds are that they are probably 90% accurate and by not getting them out to the local stores you have missed on a huge chunk of advertising. Currently the only advertising is the website which you can find here: Genghis Con XXXVII

It is a nice website but you need more than that to let people know that the convention is still going on. The sudden emphasis on cosplay kind of blows my mind, that has never been part of any of the local game conventions. Sure there have always been a few folks in costume but there has never been anything organized just folks that like dressing up. That's something we always left to the folks at the local anime convention, Nan Desu Kan, or DASFA's science fiction convention, MileHiCon.

The first convention GFV took over from the DGA was Tacticon. They did okay, but you could feel a substantial slip in attendance. One of the local RPG groups, the Pathfinder Society (?) wasn't there but they will be there for Genghis. That's huge from my standpoint as that is where most of the folks that take our painting classes come from. So that's exciting news, I just hope the attendance numbers level out and we don't see another big decrease.

Looking at the schedule there appear to be plenty of events so folks should be able to keep busy all weekend. Unfortunately our painting classes aren't in the event section but are under the programming tab. While the list is complete and the times are right I'm not quite sure how anyone is suppose to sign up for the classes. Hopefully that will be addressed at the registration counters.

Because we received confirmation so late the CMPA is running a very abbreviated class schedule this year with only 8 classes as compared to our normal 30+ schedule. With that in mind we are basically going to run basically an extended version of our 3rd Saturday painting sessions and you are welcome to just come and paint with us starting on Friday!

So as I mentioned a very abbreviated schedule this time around. We are going to handle 8 people per session though to compensate a little bit for that. Reaper Miniatures will be helping us out with paint and minis which is always generous.

There will be an auction, something that was missing from Tacticon. This will be Friday night and Mark has been handling that aspect of my con time. I'm not sure it will be up to our usual numbers but we will know pretty quickly. I'm hoping for at least a reasonable turnout so we can get that back on track again. My only issue is that they are apparently allowing online registration of lots and I'm not sure how well that is going to work. I may have nothing, I may be swamped.

So its coming up this weekend and I'm actually looking forward to it. and I hope it goes well. 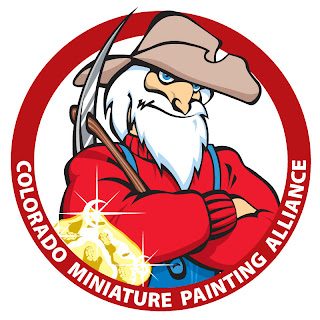 Posted by Heisler at 8:17 AM No comments:

Building Calamity 29 - The "Hardware" Store - Getting to the Roof On

Like I have mentioned before, I really like how the building is coming along. The weathered wood is not as "silver" as I wanted but that's always a matter of experimentation anyway. Rather than dive into the painting though I thought it was time to finally get to that scary roof.

I started just cutting out the two basic roof panels out of 1mm foamed PVC sheet stock. I then cut out the sections where the half dormer style windows sit. I also cut the sides of the dormers, and managed to get a pretty good match to the angle of the roof.

The really difficult portion is mating the dormer roof to the regular roof. I have always had trouble figuring out how to cut that angle. It is definitely slowing things down at this point. You can check out my current process below.

This little kickstarter is now under the 72 hour mark to its end and they are close to breaking the $400,000 mark and reaching their final stretch goal. They report that all components, including the stretch goals, are tested and ready and none of these will delay the delivery date. Based on that the $400,000 stretch goal is the final goal regardless of how much money is raised at the end. This is an important stretch goal as it takes the boss mats from being double sided to being single sided which will add a lot more complexity and flexibility to the game right out of the box.

$26 will get you into the deluxe version of the game with all the achieved stretch goals both physical and digital. This is a good company and I highly recommend them from my last experience on kickstarter. What are you waiting for?

This one felt like it took forever to get here. I managed to make the initial order while the company was on Christmas Holiday and then the Royal Mail and the USPS didn't handle the hand off very well. But my American Paratroopers finally arrived today, a little frozen but some heat should fix them right up. Not to much heat though I don't wan't molten piles of pewter all over the place.

These are very nice minis. They looked a little small coming out of the package but it looks like they will stand up well against my British Paras. Now I have all three components for some D-Day scenarios this coming year. Of course they need to be painted so they are going in the que, need to finish the British Paras first, then the Germans, then finish off the German vehicles conversion (which quite frankly has me stumped at the moment.) then I can get to the Americans. Probably will see a couple of these in as entries into the Lead Adventurers upcoming contest.