This was a Christmas present for both myself and my wife. We tend to spill with stuff for various projects all over the dining room. We had run across this crafting cabinet earlier in the year, marked it as very cool, and then ignored it because it was very expensive. We received and unexpected Christmas check from my mother and decided to splurge on this cabinet.

This thing will hold all my modeling supplies and then some so splitting up the space between our mutual and specific hobbies isn't a problem. Putting the sucker together though required patience and held tongues. We opted for the DIY version since getting it assembled would add $400 to the price. We thought about all the various DIY furniture we had put together and figured it couldn't possibly be that hard. It took us 10-12 hours to assemble this thing over the course of about three weekends. The instructions estimated 4-8 hours. Four hours might be for someone that has put several of these together before and it absolutely requires 2 people to assemble. So really think that $400 before you decide to do it yourself.

Some of the instructions will drive you a bit batty, hence patience and read everything two or three times. Even after that I managed to do some incorrect assembly and had to back up. The instructions for the crown are particularly frustrating. Just remember the screws you are looking for aren't in the big box of parts they are in the small box that has the power cord in it.

The other thing is under accessories they need to sell the "I screwed up and need max storage" option. Or at least a pop up warning when you don't get it with max storage.

This cabinet would be a ASL player's dream. I'm pretty sure it would store just about everything that has ever been printed. From a crafting standpoint it would be fantastic as well, for me I can't do all my modeling here. Pigments can get quite messy plus the smell from my enamel and oil paints would drive my wife crazy so those operations will continue to take place in the current workroom.

Posted by Heisler at 4:47 PM No comments:

As you know from a recent post, I assembled a single Rubicon StuG IIIG a week or so ago. That particular one was built as a late war version with the saukopf mantlet with the late production muzzle for the 75mm 40/L48 cannon. Today I pulled out the other two kits that came in the bundle. The goal was to at least get all three built and ready for phase 2. In the middle of the first build I had to find a tool and I stumbled across yet another Rubicon StuG IIIG kit so I added that to today's pile.  At this point these are relatively old kits having been produced in 2015. I think they have held up very well and not being a StuG expert I didn't see anything that seemed "incorrect".

I decided that I would photograph the build this time in sequence with the assembly steps and try and give a few pointers. So here we go.

First up is today's work space:
Step 1 Lower Hull:
I didn't really experience any problems in this area. Everything fits together quite nicely.
Tip: when you are attaching the side plates with the running gear. Make sure you apply gently pressure downwards so that the sides don't ride up. If they ride up the back plate (B8) will not fit properly. If that piece doesn't fit properly then the upper hull won't fit well either.


Step 2 Upper Hull:
This portion of the build is also very straight forward. But there are a couple of gotcha moments, one of which took me all three builds to finally figure out the best way to do it.
Tip 1: Remember that the gun mount should not be glued or your gun won't elevate. I found that if I put piece C26 in first and pushed it so the back of the piece was pointed about 45 degrees downward it was much easier to glue piece C04 to the back of it. This should be the first part of Step 2 you do.
Tip 2: B11 was a nightmare piece for me on every build, I finally found a better way to attach it on the third build of the day. Make sure the make side of the piece is perfectly flat you need all the surface area you can get and there are no pins to glue into holes. This one just goes flat against the back of the upper hull. Look closely and you can see the spots where it should be glued. There are two injection marks on the back of this piece, this is what must be filed or sanded flat to get good contact. I put glue on the two ends and on the filter (which is in the center of this). I lined it up and then put pressure on the filter itself which seemed to be the only point where I could get good pressure on the end points. Once the glue has set a bit I could shift and place my fingers on the antenna portions and make sure they were firmly attached. A couple of actual attachment pins would make this a whole lot easier.

Step 3 The Cannon (Our favorite part!)
Nothing terribly difficult here, just have to decide on the extra armor and the gun.
Tip 1: If you are going to drill out the muzzle (and it looks funny if you don't) this is the time to do it. I used a smaller bit (#63) first to get the holes started and then finished up with something closer to the shell size.

Step 4 The Roof
Important: The directions in my kits are all wrong in step 4, there is a correction on the Rubicon Website but I certainly didn't think to look there for anything like this. Three of my kits were just purchased from Rubicon Models so there are a lot of old instructions out there. Essential two of the diagrams are showing the incorrect roof. The Early Production roof should be B03 not B04 and the Mid Production roof should be B04 not B03 as stated. This kind of messed me up because I was trying to build at least one early, mid and late production version of the roof, fortunately since I ended up with four kits I was able to build all three variants.
Otherwise nothing tough about this build other than that there are no marks or pins for piece B12 which is optional. Just grab a reference from the web if you are a stickler for exact location which probably varied anyway.

Step 5 Rear Hull
There are a lot of different things you can do in this particular step. Just remember that there were probably dozens of different ways these vehicles came from the factories or were changed in the field. You can't ever by "wrong".
Tip 1: If you intend to use the rack and its extensions or even just the rack then its best to glue part B05 in place first and let it set. It has a tendency to slide while the glue dries. It does not have any locator pins or even slight indentations on the hull. The best indicator of where it should go is actually in the third little box titled Late Production. If you are going to add the extensions then its really important that this piece has set up so don't hurry. Once it is glued in place then I added the two extensions. Its easier to line up the the ends of the top crosspieces and let that guide the location of the back leg. Be patient.

Step Six Finishing Up
Lots of misc catch up detailing in this step. Side skirts are optional, smoke launchers are optional, you just have to make a decision on the top hatch and the spotting binoculars. Look around at some reference pictures, there are a lot of ways to add these pieces.

At the end of the day:

The next step will be to separate the side skirts and add some damage to them. I'm going to go in and mess with the front and back fenders as well, can't have them looking to factory fresh at this point. I also intend to adding two cables to at least two of these and maybe all four. Fortunately I was looking at the German Stowage pack from Rubicon and it has the tow cable eyes so I just need to add the wire. Also stowage will be painted and added after the vehicles have been painted and weathered.
Posted by Heisler at 8:09 AM 2 comments:

Now this was long time coming, probably one of the scariest mini series ever produced. It certainly deserves its own clue variation! This was the other Christmas release for 2019 that I picked up. Still thinking about the other ones, they might be a bit harder to find as the year goes forward. These special editions seem to disappear pretty fast.

This Hasbro edition comes in the current standard sized box with the smaller square board. Playing pieces are cardboard and placed in plastic stands. The six weapons are pewter which seems to have become a standard in the current Clue variations. As a Type II game it comes with the intrigue deck, with this deck the bad cards are the red balloons. First seven are no effect but bad things happen with #8! The board is square but its one of the compressed versions so not as many squares to move through.

If you are Stephen King fan this one is probably worth picking up! 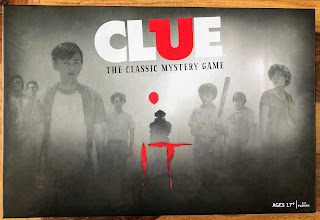 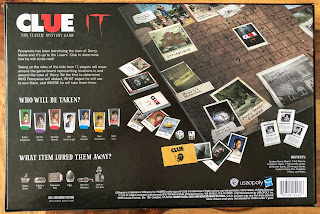 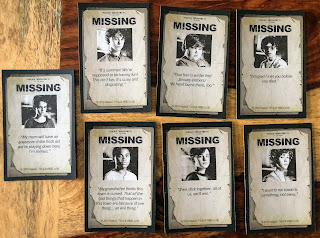 Email ThisBlogThis!Share to TwitterShare to FacebookShare to Pinterest
Labels: Clue, It Clue Edition

Christmas time is always seems to bring out new Clue variations. I counted 7 this past Christmas Season. Five of those will have to wait, for this post we will talk about everything Scooby!

The first edition of Scooby Doo was one of the first variations of the game that I became aware of and must have been published in the early 2000s. First edition comes in the long box with the larger board and featured pewter characters and weapons. It uses the standard Clue rules.

The second edition was stuffed into a small box, just big enough to fit the board itself along with the pieces underneath. It also featured the same pewter characters and weapons. It also uses the standard Clue rules.

Third edition, from Hasbro, is a bit of a different dog. It is in the current standard box with the reduced sized and square board. The pewter characters have been replaced with the current generation of cardboard cutouts and clear plastic stands. This edition uses the Type II rules; each character has a power usable once per games, in addition there are "?" on the board that allow a player to draw from the intrigue deck. The intrigue deck allows players to do different things but also includes monster cards. The first seven monster cards don't have any affect but the player the draws the eighth monster card is out of the game and the monsters are shuffled back into the deck.

Posted by Heisler at 7:38 AM No comments: