After the floor was in there was dry walling and painting and cabinet installing. It all sounds like it goes very quickly but you would be very wrong! We were fortunate in that the guys doing the tiling were also installing the cabinets which gave them a heads up on different conditions in the kitchen that they would need to deal with. 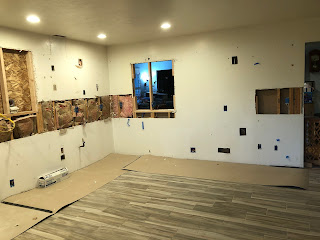 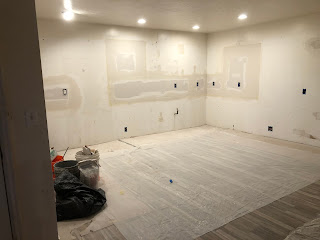 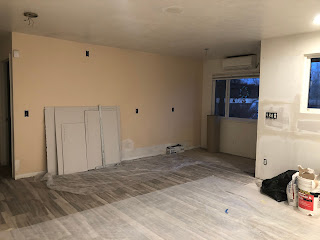 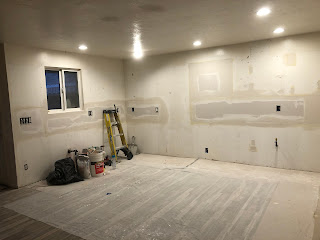 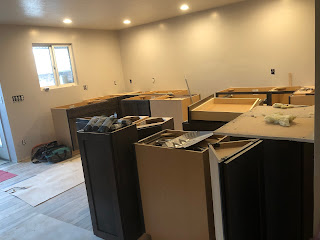 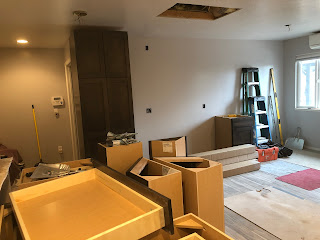 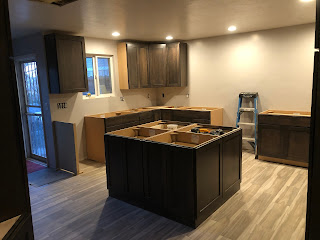 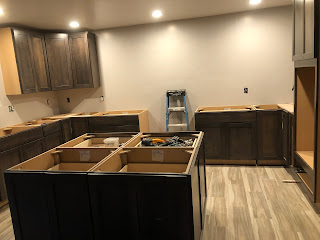 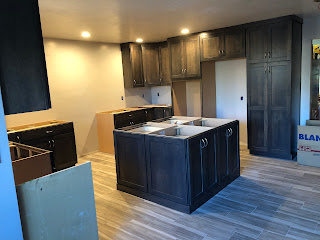 Posted by Heisler at 1:10 PM No comments: 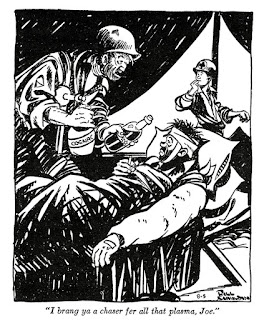 Yes, its a day early, the weekdays are starting to run together. Not to mention I saw a picture with lines at liquor stores of all places. This Bill Mauldin cartoon seemed quite appropriate.

Posted by Heisler at 7:12 AM No comments: 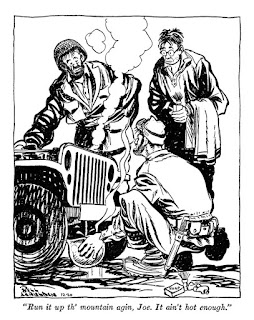 Posted by Heisler at 8:16 AM No comments:

World War II Project - a Trio of Jagdpanthers - the Build 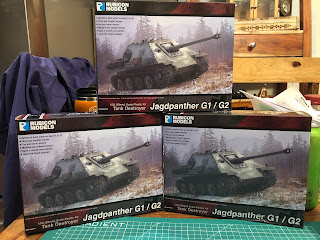 This one is going to be a bit extensive, the proverbial wall of text perhaps. I'll go through a step by step build of a Rubicon Jagdpanther. This will be the G1 version for the Schwere Panzerjager Abteilung 654 after it was modified by their maintenance shops.

Step 1: Building the running gear and the lower hull. I'm not assembling the tracks and wheels at this point, it will be to hard to paint the inner wheels if I build them up, so those parts are all loose at the moment. One thing to keep in mind when you do assemble them is that the solid side of the wheel (no visible hole) faces to the outside. If you build them backwards you won't be able to mount them properly to the hull! At this point the only part of the running gear I have actually assembled is to glue on the driver and return wheels.

Step 2: Periscopes. In step 2 you need to make the decision between the G1 and the G2 version. For this build I will be building a G1 so I'll be using part C01 - G1 Hull. Since I will be building a version as modified by 654's a maintenance shops this is a good time to clean up the hull by removing the tools. I'm also going with a closed periscope hatch on this one. As always be careful with the knife and file work! On the left side I managed to file away a piece I shouldn't have and a slip of the knife removed a couple of attachment points up higher on the hull. Fortunately I have plenty of plastic stripping that I can replace the unintended consequences. It was quite a bit easier to remove the tools from the right side of the hull.

Step 3a: G1 Gun assembly. The only note I would make here is that you can glue piece D26 into place before you try to assemble the jigsaw assembly of the gun and I would recommend you do that. The gun is very "movable" I will probably glue it into a straight ahead orientation rather than leave it as built.


Step 3B: G1 Right Side and Upper Hull. There are a lot of optional parts in this step. The first thing to note is that D01 is unique to the 654th. If you are modeling a vehicle from another unit only use C09. I'm just happy that I didn't end up having to build this component from scratch. I'm definitely using C07 and D06 as those are tools that were moved from the hull sides to the rear. More appropriate for a 654th Jagdpanther but since they made recommendations to the manufacturer about placement they could be found placed in this way in other units. For now I'm leaving off the tow cable and the tracks. Based on the pictures the tow cable is just way to short and the spare tracks will go back on after the base camouflage is on. There are two selections for the rear hatch; B09 is closed, B10 is open. Although you can use B10 for open or closed. Not quite sure where I should be putting the jack block either. From the 654th history I don't see it any pictures so it may just go on the side if I can't find an alternate placement point.


Step 3C: At this point, I had to go off the reservation because of the modifications. Again primarily moving tools from one point to another. There is a fair amount of filling that needs to be done on the hull at this point, I'll follow up with that later.


Step 3D: Rear Plate. While I glue everything together (and used the earliest style exhaust pipes, there are three options for these) for the next two I wouldn't glue anything to the rear hull plate until after the hull halves have been assembled. I ended up needing to reattach the hull jack and one of the exhausts. 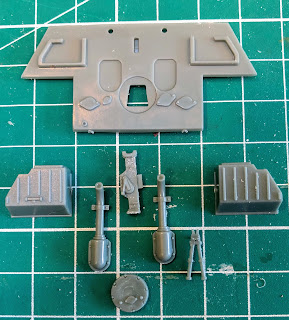 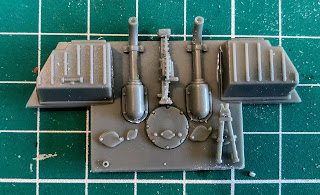 Step 3e: Here you will be attaching, and maybe cursing, gluing the upper hull to the lower hull. After that comes the sideskirts, which I won't be using, the crew figure (I wish there was more than one) and the rear plate.


So a few more notes. In step one there you attach C12 and C13, don't attach those in step 1. Do not attach those D Rings until you have assembled the lower and upper hulls. As I was putting the two hulls together I heard two pops as those D Rings went flying off into the vastness of the room, likely to never be found again. Its not a huge deal that they are missing now but the hulls will go together easier if you do this after the hulls are assembled.

Overall I'm pleased with the kit but I do feel there are somethings that could have been done better. The instructions certainly should have gone through an edit or two and it would have been nice if the G1 hull had a zimmerit coating since most of the G1 hulls had the concrete coating. I also had a hard time getting the hulls to match up cleanly. I'm going to do a little filling on the front to sharpen up that edge. The rear isn't to bad although I would have liked to have clamped it in place while it dried.

Overall, I like the kit and would recommend it. Should be a nice sturdy vehicle for the wargame table. Now I just need to figure out how to put zimmerit on it and make it look good. Never been one of my strong points.
Posted by Heisler at 9:01 AM No comments: 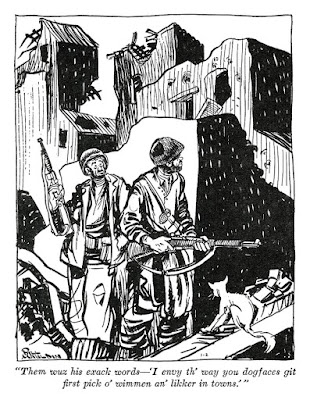 Posted by Heisler at 6:41 AM No comments:

Rubicon had their new Jagdpanther up for sale in a buy two get one free deal so I'm now the owner of three of Jagdpanthers. They arrived quite promptly yesterday and I'm hoping to build at least one of them this week. You can build either a G1 or the G2 version so Rubicon has supplied to different hulls to work with. There are going to be a lot of extra parts in this one (much like the new Sherman kit).

My plan at the moment is to build a G1 and a G2 version for Schwere Panzerjager Abteilung 654 and build the third for a different unit. Battalion 654 was the first to receive the Jagdpanthers and recommended changes that would later be worked into the G2 version. That's the plan at this point. It also means the backlog of German vehicles ready for painting is going to expand again. I may as well figure out how to put those Warlord Games P107 halftracks together. 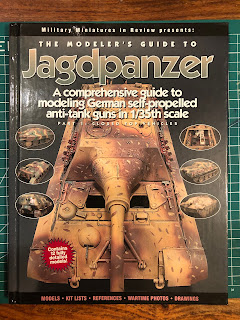 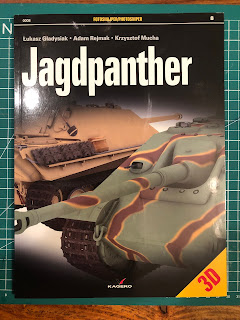 Unfortunately the tiling crew was down a man and it took three days to tile and a fourth to grout before we could move forward to fixing the drywall. 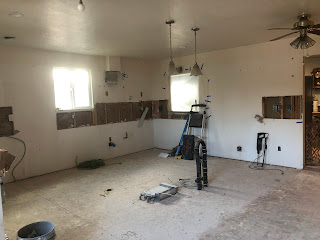 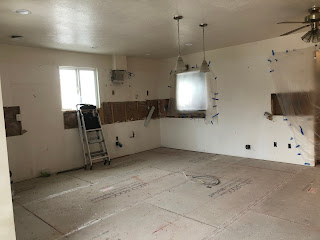 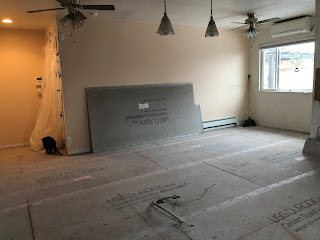 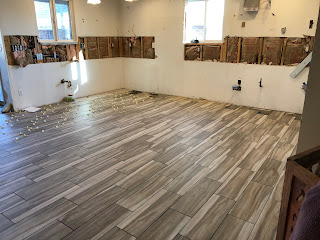 Posted by Heisler at 6:36 AM No comments: