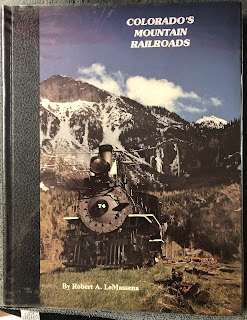 I have found that lately I have moved away from the majority of the reference books that I thought I would need for this little project. My initial thoughts were that books on specific railroads would be the most useful. In fact most of those books don't really include the kind of information that I'm looking for in regards to actually building track through the Colorado Rockies.

While books like the "Denver, South Park & Pacific Railroad" by M.C. Poor are full of detail and pictures and can be quite dense they often skip over the parts I'm most interested in which at this point is which passes did they survey and how did they determine what might be possible and what was not? I know that finances often played a large part in that determination. In theory you should be able to get a train over almost any pass if you have the money to do it. A nice theory which definitely does not define even begin to reflect reality.

My next reference foray is from a slightly different direction, mostly accidental googling. I found some references specific to mountain passes in Colorado that, at least the description say, include historical notations including if the pass was surveyed by a railroad. That's the theory part I'll know when the next deluge of books hits.

The best book so far is "Colorado's Mountain Railroads" by Robert A. Le Massena (Sundance Publications Ltd 1984). It includes a synopsis of just about every railroad that was built in Colorado, including timelines for each of them (some are quite short). It has helped bring about a fuller picture of the interactions when between the various railroads and how ownership of a railroad could have significant impact on other multiple lines. A few examples of this are the formation of the railroads like the Union Pacific, Denver & Gulf and the Denver, Leadville & Gunnison. Both of these were created by small Colorado railroads that were controlled by the Union Pacific Railroad and both of these were still controlled by the UP, until the UP went into receivership in 1893 at which point these were railroad conglomerate were appointed to different receivers and then were later bought and consolidated as the Colorado & Southern RR which was not longer under UP control. Initially the C&S was an independent line until it was purchased by the CB&Q in 1908 although it continued to operate as the C&S until 1982.

Or another interesting fact. The Denver & Rio Grande Railway was only part of the system envisioned by General Palmer. He also owned the Denver & Rio Grande Western which started building from Salt Lake City to the Colorado border. While both were controlled by Palmer, at least initially, they were two separate corporate entities. And to add further confusion to the mix the Rio Grande Western was also controlled by Palmer but was yet another corporate entity distinct from the first two, although eventually all three would be merged together. The are a myriad of reasons for why things were done this way but in the end it all comes down to finances and they very much robbed Peter to pay Paul to get there.

So while I wait for better information on mountain passes I'm trying to work my way through the labyrinth of financial shenanigans that could take place in the game!