I continue to toy around with my 18CO design. Spurred on a bit by finding an almost complete copy of 18GM in the basement of the other house. Components aren't really an issue with this one but the rules were. Much like 1869 there were a number of fairly innovative concepts built into what we referred to as the Aurora Rules and there was no way I would be able to remember what they heck we had done from memory. It will take some time but I can now get those rules from the original printing back into a computer file.

Fair warning, I do consider the following to be copyrighted material.

I have been working with a gentleman to create a custom map that will be the background for the game itself, if it gets that far. What you see below is the current iteration of that map, definitely not the final version. What I have been struggling with is how big the board should actually be. I have come up with three iterations; the 12 hex, the 15 hex and the 19 hex versions. These "measurements" refer to the number of hexes in the east/west hex rows. 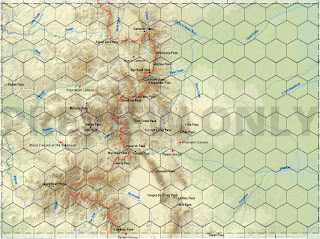 This is the 15 hex map. It doesn't sound like a huge addition but from a tile count perspective its a pretty big change. Its going to fall into the mid-to upper side of board sizes but it really helps spread things out and increase the number of possible routes as well as the allowing more towns/cities to be represented.

At present I'm leaning towards the 15 hex map as the best size to work with. I'll probably make prints of all three just to get a feel for game play.