With a little incentive I finally finished off the WWI Marines that I started back in January (a theoretical re-boot at the time). The first surge of motivation came from the Great War Painting Club on Lead Adventurer. I'm a sucker for badges so I had to get some minis done for this and collect my badge.

From left to right: Old West Painting Posse, Lead Apocolypse - PA Painting Club, The Lovecraftian Painting Circle, The Colonial Painting Expedition and the Great War Painting Club. I have missed 3 or 4 but I don't intend to miss anymore.

After working on the ones for the painting club I thought I would finish tackling the rest of the platoon in groups of 4. At which point I promptly came to a stop. Then Bill Daniel, a local wargamer, told me that he was going to build a Belleau Wood board (similar to what Sydney Roundwood does) and another surge resulted. So this weekend I punched out the other 14 minis to flesh out my second platoon of Marines. One of the things that has been stopping me is I haven't been completely satisfied with my uniform color. While there was a lot of variation in the uniform color I still wanted something closer to what I have read. A forest green that could be mistaken for the German Feldgrau uniform. So I found these pictures (taken by Kristopher Battles, USMC Combat Illustrator, and yes, I asked for permission to use them; Granted!) taken as part of a USMC project. Both uniforms are USMC Forest Green. Specifications apparently were only a "suggestion" back in WWI.


So I have been fighting with this color for a while now. My current formula yields a uniform that looks like this: 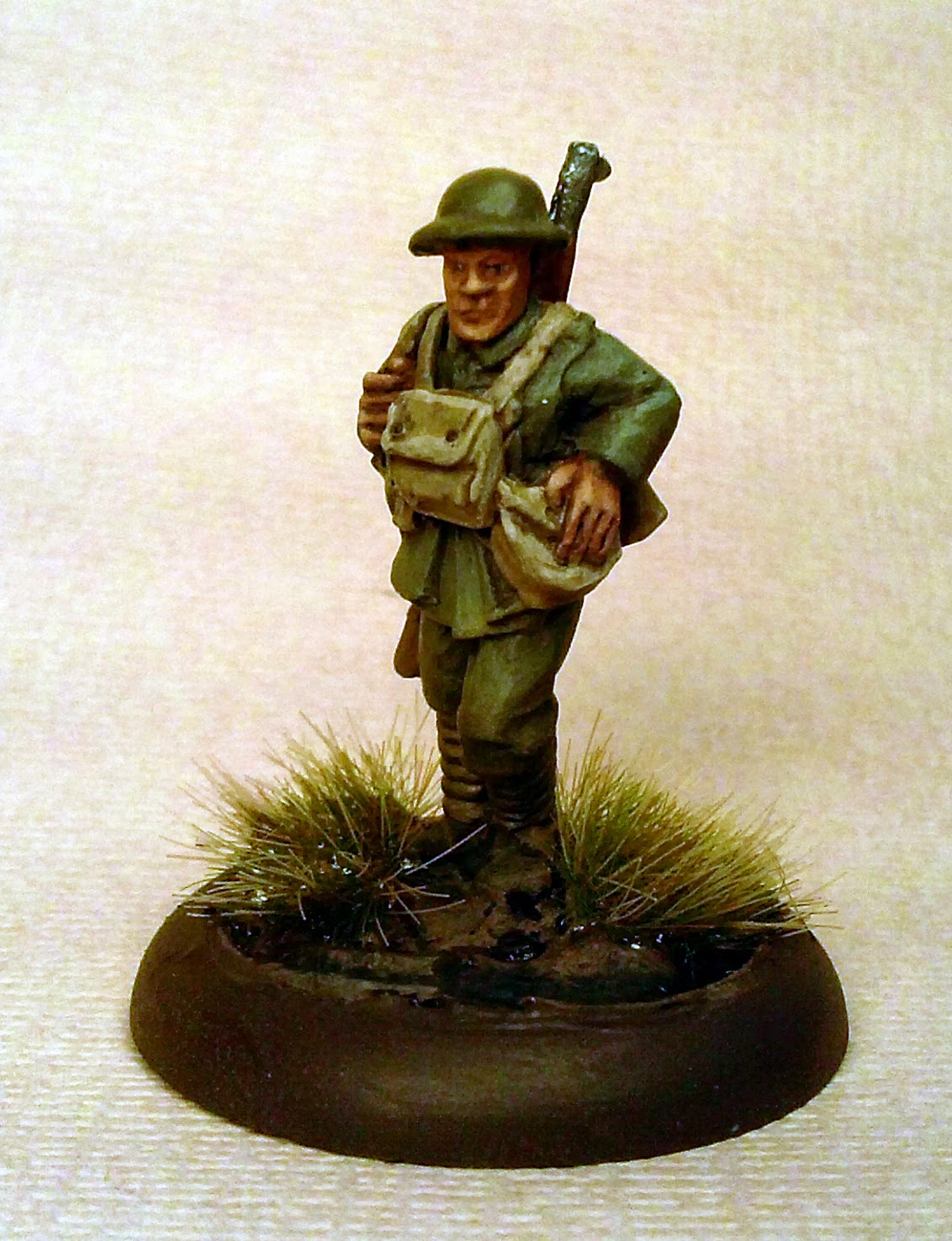 Although it has a Feldgrau base, I think I "greened" it out to much, So on Friday I texted my friend Anne and she proved that she is the color goddess. She suggested some colors from the Reaper Master Series paints that I had not considered; Brown Liner or Grey Liner, Jungle Moss, Field Grey and Misty Grey. I'm willing to experiment so I divided the minis in half and designated Uniform 1 as the following:

Uniform 2 would use the Grey Liner in place of the Brown Liner, everything else remains the same.

Here is a comparison after basing coating both "units" 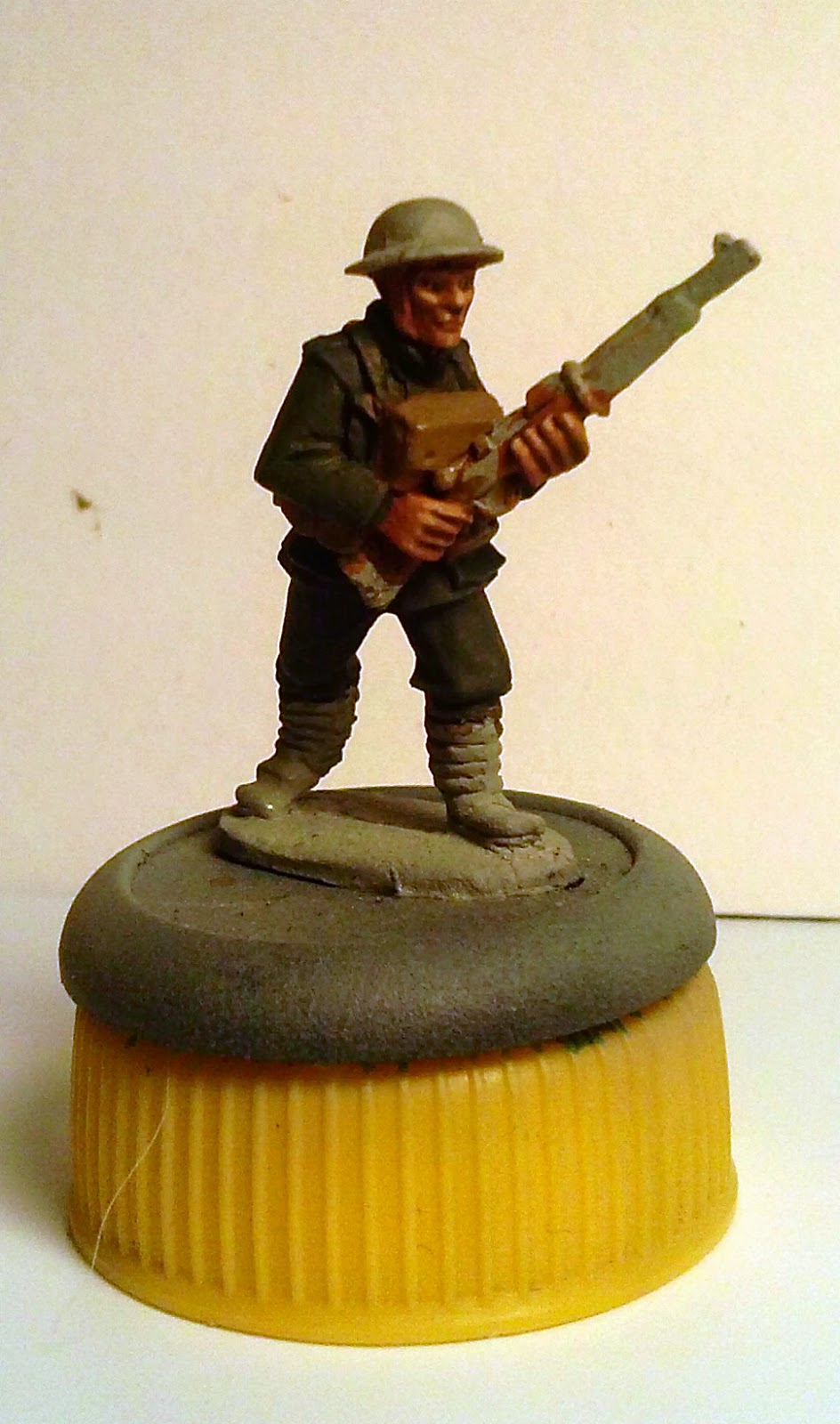 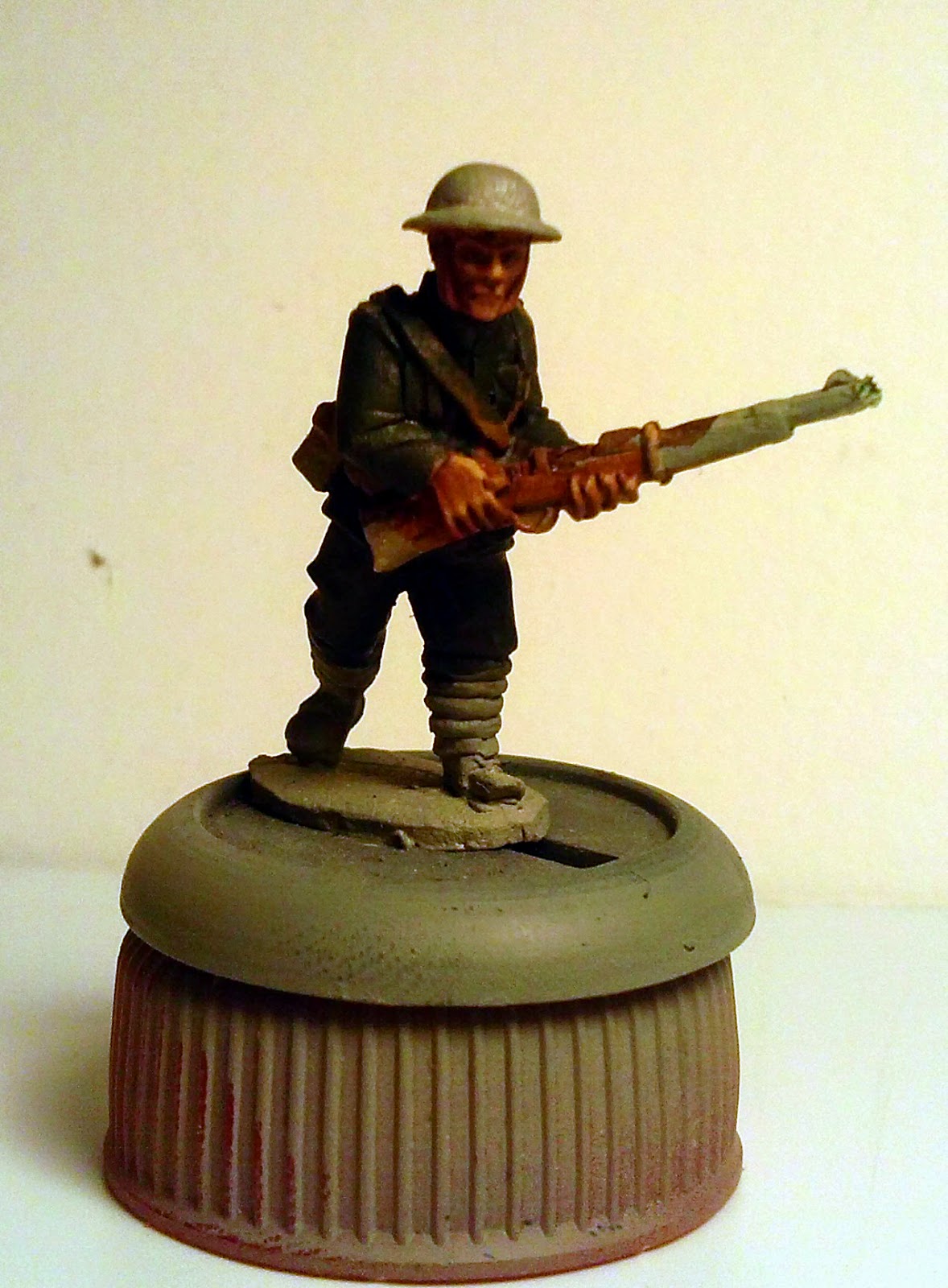 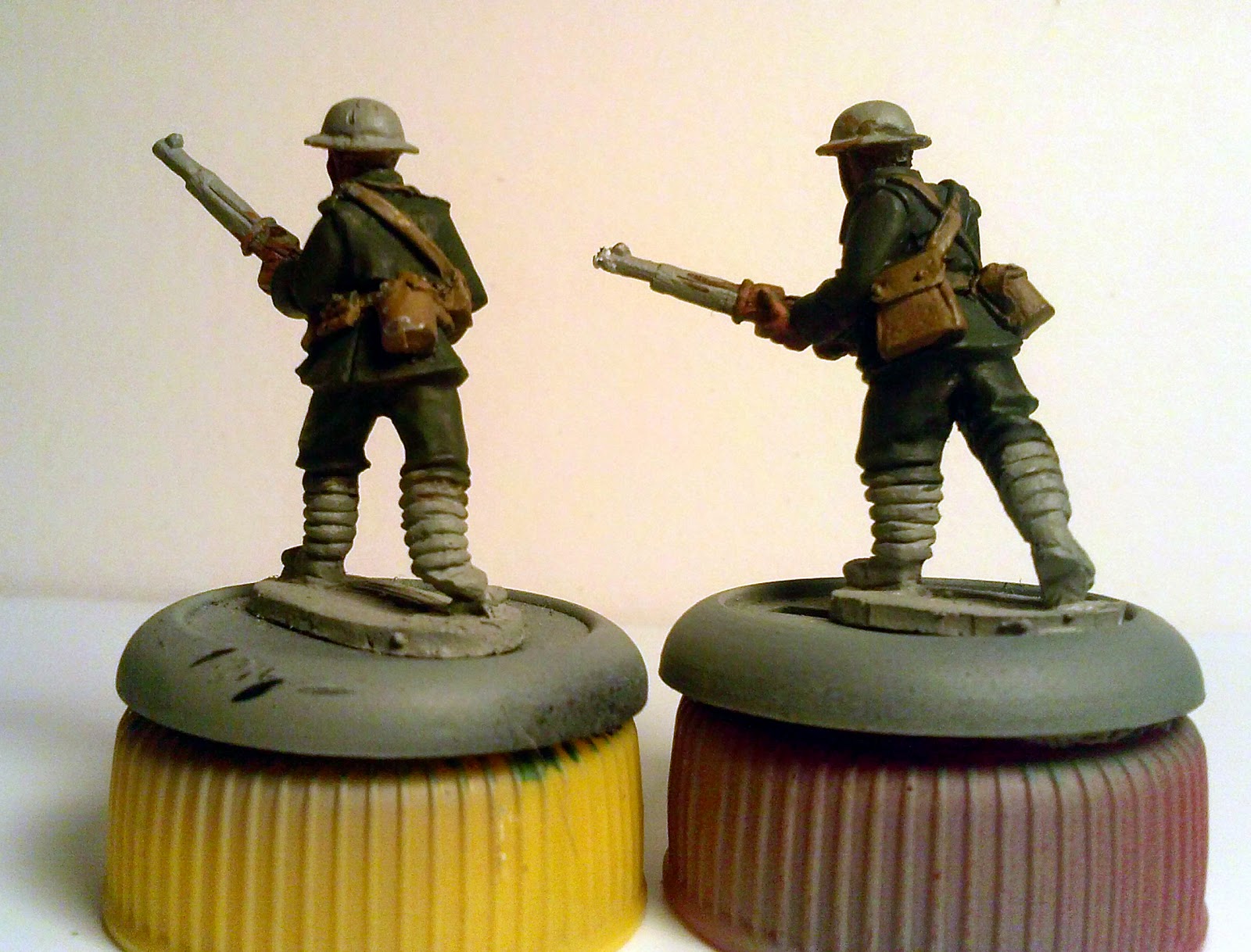 It is hard to tell the difference between the two in the pictures. In person uniform 2 is a bit more "gray" than uniform 1.

I finished everything up with some intensive sessions on Saturday and Sunday and 14 minis are ready for basing. Here are the finished photos:

At this point it is hard to tell the uniform 1 group from the uniform 2 group although I think the uniform 3 group will be easy to tell apart from the others. I'll finish the basing and mark the bottoms of the different uniforms mix them up and see if I can tell the difference or not. At this point I don't think it matters mostly because of the fact that I start with the shade and work my way up. If I start with the base coat and work both sides of that line there might be a bigger visual difference. The one aspect that I had doubts about was using Misty Grey as the highlight color, but it worked like a charm and I feel like the finished uniform color is pretty close to the Marine's uniform that I was aiming for.

The third platoon and fourth platoon of Marines are going to get mixed uniforms to show the transition from the Marine uniform to the US Army uniform. One platoon will get Forest Green tunics with Army Drab pants the the other platoon will get Forest Green pants with Army Drab tunics. The fifth platoon will be in all Army Drab (Pershing wouldn't allow the Marines to ship over replacement uniforms so they drew replacements from Army stores. However, Marine replacements all came equipped with the Forest Green uniform creating a very rag tag look, especially after Belleau Wood). I'm not quite sure how I'll approach the supporting units like MGs, Mortars and Artillery. The platoons at this point are just a convenient way for me to organize my miniatures for painting. Ideally they are setup for the out of print Warhammer Historical Great War rules, but I have no idea what we will be actually using.

I should be able to start the third platoon tomorrow, all the filing has been finished and they just need to be primed. I'll probably prime everything that I have bases for at this point.
Posted by Heisler at 6:14 PM