I made a lot of progress on different projects in November, I'm hoping that trend continues into December. I decided to start off with the second of the two Row Houses for Calamity. Again I'm not sure if these will make the final cut on to the board. They are larger than I had anticipated. But they are useful testbeds to try different building and finishing techniques on.

I originally cut the pieces for this house at the same time as I did for the first one. Of course that meant that I repeated the same mistake I made on the first one as far as the size of the openings I cut for the doors and windows. I was also vowed to stick to the order that's really necessary to avoid doing a lot of interior painting after its assembled. To make this one different I wanted to use wallpaper rather just bare planking so I left the interior side of the pieces smooth. The first thing I discovered was the paper I intended to use was just to thick so I had to scramble for an acceptable alternative, in this case some of the pages out one of my moleskin books. Its about the right color but its probably a little to thin. I'll have to drop by Michael's or Hobby Lobby and go through the scrap book sections again to find some suitable patterns or even just blank white paper that's the right thickness. I have a file of wall paper patterns but I'll have to be sure to scale them down a bit. Most patterns that I have seen used have a pattern that printed out to big. The patterns are scaled for dollhouses and a much smaller version of the pattern is necessary for my buildings or it will really dominate the walls.
[Dollhouses are typically scaled out to 1/12 scale (1" equals a foot) so they should be reduced to about 25% of their actual size which really only gets us down to O Scale or 1/48.]

As I figure the owners aren't into frills this building gets plain wall paper on the walls. It ended up wrinkled in a couple of places and a few bubbles. Initially I tried to smooth these out and then I decided to leave it, it adds character and shows that the roof probably leaks as well. I might go in and add some streaks from water stains. Along with the wall paper I decided to add a chair rail all the way around as Doug suggested during the work on Row House #1. I wavered on adding an interior wall to make it into a two room house but decided against it. I think I will have plenty of opportunities to work with interior walls in future buildings.

I have completed the interior with; wallpaper, chair rail, baseboard trim and painting. I'm going to add some painter's tape over the openings and along the edges so that I don't get overspray  from the airbrush on the inside. Before I move forward with the exterior painting though I'm going to add the exterior trim and paint the front and backs of the doors and windows before I add them to the walls. I may go ahead and paint the exterior flat without the doors and windows and see how that goes. 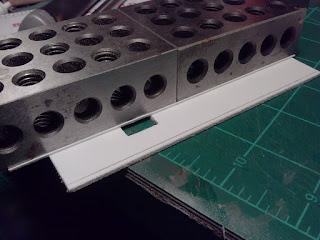 The other thing that I toyed with today was the concept of lighting the town. A couple of friends thought that I could probably make a could portion of each kerosene lantern or lamp from beads, along with some thoughts on how to make that characteristic bulge in the glass. If I go forward with the lighting I'm likely to need upwards of 100 lamps for the project so they need to be relatively cheap and easy to build. I delved into the beading/jewelry world a bit, its a scary place.
Posted by Heisler at 9:28 AM